Must Sees in Siena

Siena is one of the world’s most unique and impressive cities. 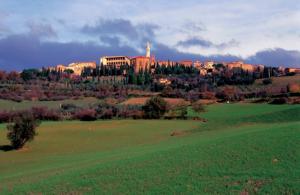 Certainly, Italy is no stranger to cute and quaint medieval villages; and with the likes of Rome and Florence it is rather well accustomed to the large-scale splendor produced by the Renaissance. But in Siena, like in no other Italian city, we see these two aspects existing harmoniously side-by-side to create a massive medieval fortress-city sparkling with the genius of the Renaissance.

While even a drunk Sienese man would have to admit that Florence’s contribution to the Renaissance far exceeds that of Siena (not to mention that the former conquered the latter in the 15th century), Siena offers a distinct charm that many prefer to Florence’s. Indeed, we might say that Florence is like the Beatles who revolutionized modern music with a full-frontal assault on culture; and, in its own way Siena is like Bob Dylan, who with unrivaled brilliance influenced Western culture just as significantly, only in a more subdued, inward looking fashion. While such a comparison is not perfect, it does convey that despite the fact that Siena is not usually spoken about with as much vibrato as Florence, it is just as wonderful and culturally potent a place to visit. 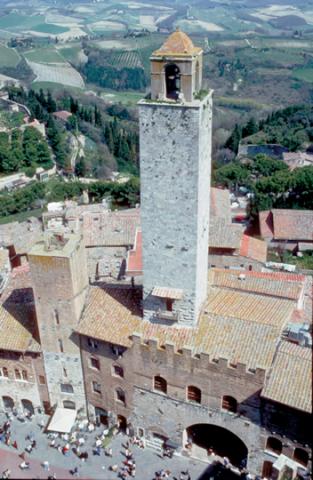 Siena is situated on a hill in a part of Tuscany so remote that getting a train there can prove difficult. But once you arrive, you’ll find a massive walled fortification unlike anything in the world. In fact, in such a medieval paradise, the dorkier among us might secretly aspire to engage in a bout of play jousting. This scenery is mostly attributed to ways in which Siena adapted the Renaissance virtues to its own local culture to create something very individualistic, with its masters very keen to leave a distinct Sienese mark on everything, like adorning their representations of the Madonna in their unique textiles. Also, Siena’s artists maintained certain influences in their work that are not seen as prominently elsewhere in Tuscany; for example, much in Siena bears hints of Ancient Byzantium even as far into the 15th century. But one might say that Siena’s scenery is stuck in the 15th century because, after it was conquered by Florence, little changed about the city physically. Siena’s adherence to medieval ideals is even apparent in its society: its neighborhoods, organized according to little sections called contrade, are pitted against each other in an annual horserace in Siena’s massive Piazza del Campo. And, to further emphasize this culture, its 15th-century bank Monte dei Paschi is still fully functioning, which is said to be the world’s oldest still in operation.

The point of departure to embrace Sienese culture begins with its art, and the best place for this is at the Civic Museum, which is filled with the most important pieces produced by the masters of the Sienese school. Beginning with the Sala del Mappomondo, we find the earliest known masterpiece of Simone Martini, La Maesta, portraying the Madonna and child. Moving to the Sala della Pace we find a thematic switch from the religious to a series of frescos conveying the Sienese’s Republic’s adherence to the virtues of good government, namely the preeminent Allegory of Good and Bad Government and Their Effects on the Town and Countryside. This very important masterpiece by Ambrogio Lorenzetti shows Siena’s glory during times of peace and its decrepitude during war. Adjacent to the museum is the Torre del Mangia, the most prominent feature on the Sienese skyline that provides those brave and fit enough to climb it with an absolutely stunning view of Siena and its countryside. Siena’s Duomo is one of the most striking features of any Italian city. It is noticeably smaller than that of Florence, but, with its zebra-like black and white marble stripes pervading both its interior and exterior, just as grand. It was founded in the 12th century and is among the finest examples of the blending of the Romanesque and Italian Gothic styles. Upon entering you will find numerous portraits of both Biblical and mythological themes. One of the most interesting is of a mythologized man known as Hermes Trismegistus, who was believed in the Middle Ages and Renaissance to be a Christian prophet of sorts who was supposedly responsible for the doctrines expounded in the ancient text known as the Hermetica. In actuality, the words attributed to him were from an Egyptian Platonic movement early in the first millennium; nonetheless, his portrait in Siena’s Duomo bears strong testimony to the incorporation of Ancient pagan philosophies into the medieval Christianity. While in the Duomo, one must also pass by its extraordinary pulpit, which was designed in the 13th century by Nicola Pisano. 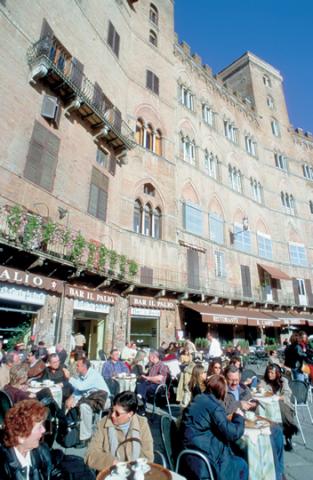 At Siena’s heart lies the Piazza del Campo, which has been praised by everyone from Medieval scholar, Renaissance virtuoso, to modern tourists as Italy’s most magnificent. Thus, not without just cause, many choose to take their morning coffee at its cafés, or to have excellent lunches and dinners at its restaurants. You will notice that unlike typical piazzas, this one is formed in the shape of a scallop shell and has an unusual incline. While appreciating its splendor, be sure to visit the Fonte Gaia, which has been locally dubbed as the "fountain of joy" since at the time of its creation by master Jacopo della Quercia it was met with gleeful praises (sadly, though, the present one is a very good reproduction; the authentic is found in less-than stellar condition in the town hall). But, while you are lazing in this piazza, you will probably pass your time entirely unaware of the marvelous spectacle that occurs here each year: the Palio delle Contrade. This is a very unique medieval tradition, carried only by one other city in Italy (Ferrara), in which Siena’s several neighborhoods, called contrade, compete Kentucky Derby-style in a horserace. As you might expect, the jockeys that guide each contrada’s horse have an amazing skill, which is rather necessary considering that the Piazza del Campo is not nearly as big or as racing-conducive as typical racetracks (actually, bad accidents happen each year to both jockeys and horses). A lovely festival accompanies the climatic race from July 2 - August 16, making Siena burst into an amazing amount of colorful activity. And while the Palio has attracted more than a few tourist throughout the centuries, one must bear in mind that this is very, very important to the Sienese, who always passionately cheer for their horse.