Must Sees in Amalfi Coast

The Amalfi Coast is among Italy’s most stunning oceanfronts, a mountainous strip extending from just south of Naples down to the wondrous island of Capri. 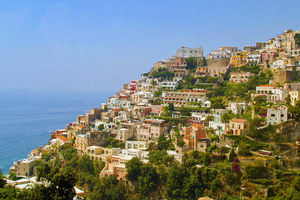 This region, once home to a great maritime state that rivaled the powerful Venetian Empire, is a lovely resort destination completed by the perfect combination of southern Italian vivacity and the tranquility and elegance of a seaside village.

Those who have driven California’s Highway 1 recall its beautiful ocean view in an almost religious breath, as something too magnificent for words. Well, imagine something even more awe-inspiring, and you get the legendary Amalfi Drive, a similar style oceanfront highway traveling the length of the Amalfi Coast. Perhaps such seductive beauty is not entirely coincidental, as the Amalfis are the mythological home of the sultry sirens who captivated Odysseus and his sailors with their bewitching melodies... 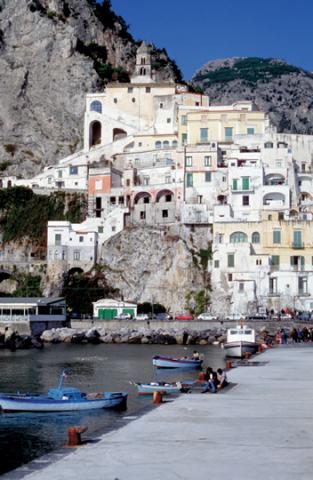 And yet there is even another myth, one in which the region’s name is rooted. Amalfi was the name of a gorgeous nymph loved by Hercules, who was buried in the region by the gods. Consequently, visitors would come to the Amalfi Coast to pay homage to her beauty; and this ancient ritual persists in such fashion even today, with tourists flocking to immerse themselves in its sumptuousness. The Amalfi Coast is the sort of incredible place that begs its guests to sit in the luxury and comfort of an elegant lounge-chair facing a panoramic view, while sipping on a refreshing glass of Greco di Tufo, or another one of the region’s stellar wines. Sorrento is generally where one begins a tour of Amalfi, and is a place with an enthralling energy and exquisite cuisine (be sure to try the gnocchi alla sorentina - a local tomato, basil, and mozzarella topping). Then we move on to Positano, the once tiny Moorish-style hillside-fishing village, but now ultra-chic resort. Further along the coast is the town of Amalfi, the region’s principal jewel that bears the traditions and ruins of the once great Republic of the Amalfis. Then we find Ravello, the most stunning town in the region, one whose beauty has seduced some of the greatest artists and novelist in recent centuries.

The Amalfi Coast began as a Roman refuge from the invading barbarian armies during the collapse of the Roman Empire. Developing a proclivity for ocean commerce, Amalfi cultivated excellent relations with the powerful Byzantine Greeks (formerly the eastern half of the Roman Empire). The industrious people of Amalfi became excellent sailors that guided a fleet that rivaled even the Venetians’; indeed they had become so amphibious that it was the people of Amalfi who invented the compass in the early 13th century, allowing their fleet to travel as far as Arabia. Visitors to the town of Amalfi will see a monument erected in honor of "Flavio Gioia," who is said to be its inventor; regrettably, however, his role with the compass is limited to myth, as he never actually existed! Due to their commerce across the Mediterranean, by the 10th century the Republic of the Amalfis was very powerful, and even had its own currency and several Mediterranean colonies. However, in the mid-11th century, Salerno, its mortal enemy, began to subdue the Amalfis with military victories. Sadly for the great Republic, it was right when it was in this weakened state that the powerful Norman leader Robert Guiscard began his domination of Southern Italy.

As a result the Republic of the Amalfis was forced to court the help of its enemy Salerno that immediately disposed of their leader, Duke Mario Sebaste. But the Amalfis were eventually conquered in 1131 by the Norman king Ruggiero II, who kept most of their commerce intact. But a few years thereafter, in 1135, a Papal alliance that included Pisa’s warships sacked Amalfi and took most of its wealth and power. Through the rest of the Middle Ages and the Renaissance turmoil of every sort persisted in the Amalfis, most notably when a terrible plagued killed a third of the population in 1643. For the next 200 years the region lay mostly uninhabited with much of the remaining population moving to Naples. This was the case until 1807 when Napoleon’s brother Joseph visited the region and fell in love with it. Not much later did the Amalfis become a popular destination for those wanting to be surrounded by natural beauty and luxury. Eventually, it would even become a potent muse for artists around the world, as since the late 19th century the Amalfi Coast has been the abode of many prolific authors and other artist.